Termal: 40 years of commitment to creating a green future 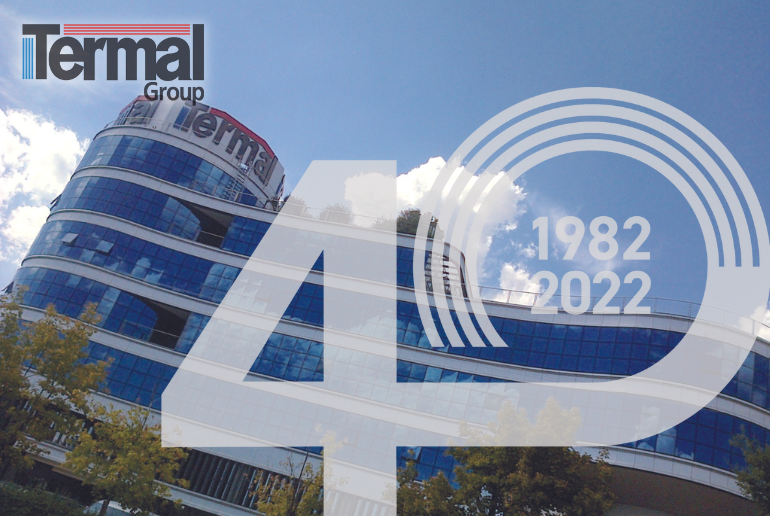 A story that develops between passion, innovation and the pursuit of excellence, constantly under respect of sustainability.

1982 marks the start of the commercial activity of the company which was born as a family business, aimed at the diffusion of heating systems. Termal is the acronym for: alternative thermo-energy.

In the beginning Termal markets heat pumps directly to the final consumer.
The main partner has a prestigious name: the German giant Siemens , with which Termal takes its first steps, confirming itself as a pioneer of new technologies for energy saving.
The heat pump was then a very innovative technology compared to that used by traditional systems. Selling these products then meant winning the distrust of the public, at a time when this technology aroused amazement and disbelief.

In 1983 Termal comes into contact with Japanese direct expansion air conditioning systems . Thus, at the same time as the marketing of Siemens products, it signs a regional distribution agreement for Toshiba air conditioners, starting the sale of a product born outside of Europe.

It is in 1984, however, that the most important chapter in the history of the Group linked to its core business begins, that of air conditioning: Termal signs the agreement and establishes a commercial relationship with the Japanese Major Mitsubishi Heavy Industries (MHI) , for the exclusive distribution in Italy of its air conditioning systems. This collaboration traces the entrepreneurial path of Termal and still represents , after 40 years, the main partnership of the Group .
Air conditioning is widespread in Japan and MHI is one of the leaders in the sector. An intense distribution scenario therefore opens up. The qualitative excellence of the products and the receptivity of the market contribute to rapid growth. Our communicative pay off at the time was for those who want to spend more.
In the early 90s Termal became a Group of Companies taking root not only in Italy but also in various European countries.
1992 marks the beginning of commercial expansion in Europe , with the development of an important network of subsidiaries in France, Holland, Germany, Greece and Spain and a dense network of specialized distributors and dealers between Mediterranean area and Eastern Europe. In Italy Termal begins the experience of large-scale distribution and 1998 decrees the affirmation of Termal Eldom, in Italy, as market leader, with the Mitsubishi Heavy Industries brand, in the fixed air conditioners segment .

In 2000 the air conditioning market was overwhelmed by the Chinese tsunami with its ultra-competitive models . The commercial management changes direction, the experience of Termal Eldom gradually comes to an end and the Group explores and develops alternative ways and channels to stay in the market: such as B2B web and franchising . Then Termal also extends its relations with the Asian giant: it opens an import office in Shanghai and joins the Mitsubishi Heavy Industries brand with proprietary brands, dressing selected products from the main players in the East. Hokkaido and Cryo’s systems for residential and commercial air conditioning are born.
Termal is currently one of the leading players on the Italian market in the air conditioning and heat pump sector in Italy and a good forerunner in Europe.

The decade 2000-2010 also marks the beginning of Termal’s bet on the future of sustainable mobility, inspired by the intense attendance of Asian countries. In fact, WAYEL was born in 2007 and the project of an all-Italian e-bike started: the first example of pedal assisted bike and cardan transmission is OneCity , developed in collaboration with the University of Bologna for battery tests. In April 2009, WAYEL supplied 150 electric bikes for the travel of ministers and their staff to the G8 Ambiente in Syracuse.

The last decade (2010-2020) is characterized by diversification in the name of the Green Economy, already in the DNA of Termal from the very beginning.

To the traditional sector of the distribution of air conditioners, Termal adds an important plant engineering activity with the acquisition of the company Geetit (2015), historical ESCo of Emilia Romagna , today focused on the new economy of energy bonuses, and strengthens the building chain for energy requalification with the General Contractor Termal Green Building (2015).

And then the FIVE project, the Italian Electric Vehicle Factory, takes shape.
FIVE is a light and urban electric mobility that starting from pedal assisted e-bikes arrives at minicars, passing

Hit enter to search or ESC to close